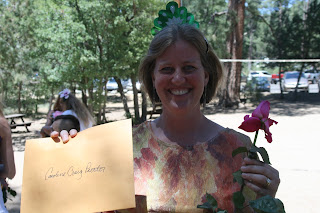 This is my final blog post for my Desert Adventures.  Here is the promised photo of me, a ‘Certified Massage Therapist intending to be Licensed’ (we practiced announcing this in our final class time together in the room with the green carpet and the anatomy charts curling on the wall)

I was surprised on this day to learn that we would not only be crowned with Dollar Store tiaras, but also kissed on the forehead by our communications and ethics teacher.

I learned that there are many ways to ‘graduate’ and some feel more like a matriculation than others.

I am unsure as to the significance of the kiss, particularly as a way of entering a profession that is so ardently arguing for its professionalism and distance from sexual practice.  Granted there was nothing sexual about this forehead peck, but it seemed a strange marker of our transition.

Sofy and Louie celebrated with me in the yard following our graduation ceremony which also included swinging high on a swingset and hula hooping.

Good ole Sofy hung in there through all the massage therapy shenanigans and also became recognized in the Prescott community as the ‘office dog’ at our local kennel RunAmok Unleashed.  People would see her at the dog park and recognize her.  “She’s so sweet” they would say.  She touched a lot of folks out west.

Immediately after graduation, we took off for a week long exploration of New Mexico, a favorite area for both Allen and me.  We started off in Santa Fe, where we spent several evenings, caught up with our friends David and Jeannene Wiseman.  We took some early morning hikes up into the forest on two days to keep our legs moving. 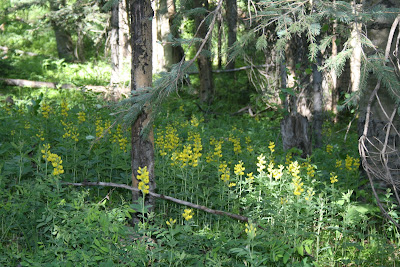 It was lovely to be at such high elevation, to walk in summer without bugs of any kind, and to spend days together without class, cloying personalities, stresses of transitions pending, or having to pack a single item.
It also whetted my appetite for things east like grass and flowers and trees and breathing dustless air. Waters move fast everywhere it seems.  We moved on to Chaco Canyon from santa Fe, and we delivered Jane’s walking stick to the opening of a kiva.  On the way there we learned that our air conditioner was not working and were trying on a dirt road in the middle of noplace except history and dinosaur skeletons to remedy that situation.  It was a startling yank back to the life we were re-entering — but not for 2 more weeks, I kept thinking. 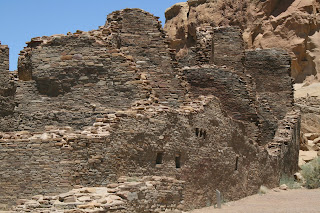 From here we drove on to Taos, taking the ‘high road’ past Ghost Ranch and Abiquiu (Georgia O’Keefe territory) and stayed in a fabulous place Allen had scoped out for us.  We visited the Kit Carson museum and nourished Allen’s appetite for Blood and Thunder.  In these interesting days of Arizona politics, we continued to try to grasp the ethos of the culture there.  Blood and Thunder tells the story of the Wild West in a way that captures one’s imagination while offering some useful interpretive insights I think.  I loved the museum, especially the newspaper article in which a friend of Carson’s wrote back to a newspaper ‘back east’ that he felt had misrepresented the character of Kit Carson. It was both an eloquent defense of his friend and a well placed lambasting of reporting without fact finding. It made me wish for more incendiary columns today.

And then it was time to pack up and drive to Raleigh.

I realized that much had transpired for us and between us out west.  We had developed friendships there, had enjoyed much more designated playtime than ever before, and Allen had fallen completely in love with the world outside our apartment and was ushering me into that world in bite sized chunks I could savor.  He hiked the Grand Canyon for 4 days at a time, and I got to back pack in Fossil Creek.  He skied the most challenging slopes north of Flagstaff and took me snow shoeing.

I was not eager to come ‘back home’.  But I discovered I did look forward to moving forward to North Carolina where many friends and family are, and that we now had practices and intentions and patterns in our life we could transport with us in our larger moving van and in our larger hearts.

Our last night in Prescott, friends threw us a going away party. It was such a thoughtful and generous gift, and I felt flooded with gratitude for these friends who had met Allen most mornings for a hike up the local mountain.  They had a huge spread for us and treated us to fabulous conversation. Mark is the pastor of the local Presbyterian Church, and Dede, his wife, is one of the most welcoming and open spirited women I know.  They hosted this fare well gathering which was dubbed “the end of the world party”. This is a photo of Tom Whittaker, another of Allen’s hiking buddies.  Tom is a celebrity of sorts:  the first amputee to summit Everest.  He in an inspirational person, and makes a living as an inspirational speaker.  He is also a stellar photographer.  As a going away present, he gave Allen a CD of music and also a CD of photographs of the places they had hiked together.  Below is a picture of Allen opening this gift. 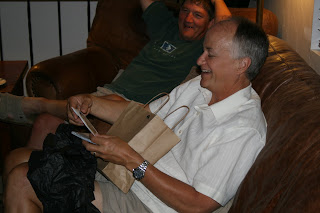 You can not see that I have tears in my eyes at the beauty of seeing this man that I love be so well known, seen, and understood by a friend. 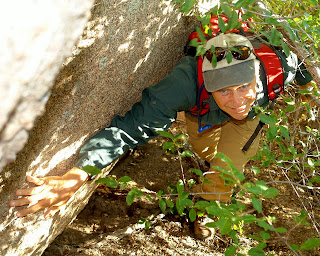 Here are two photographs Tom took of Allen on one of their last hikes together while we were out west.

the pack on Allen’s back he has dubbed his ‘punishment pack’ and it weighs 38 pounds. 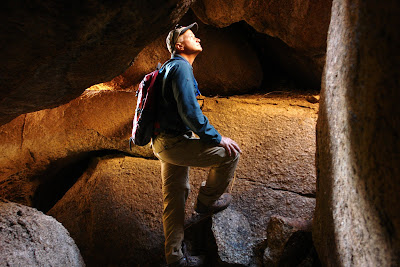 Then we drove East. 500 miles a day.  every day.  Allen pulled over at the end of our Oklahoma day, which was the day the desert seemed to turn to green.  On that day we saw this The following night we were eating ribs in Memphis, then unloading some things in Asheville (Thank you Carlton for your help!), and then to Raleigh where we bought a new air conditioner.

We took some quick trips the week after unpacking our trailer and re-settling in. Allen found us a rental home in 48 hours in Asheville and I began studying for the national licensing exam for massage therapy.  We visited our beloved Brierpatch and were delighted to find things in very good and proper working order… a surprise for a forested mountain cabin after a brutal winter. Then to the beach.

There is something of the desert at the beach — a vastness, and openness, a desertness of expanse.  The horizon seems deeper and the sun plays more tricks.  These days the dolphins are back at play and I so delight in watching their patterns in front of our view. 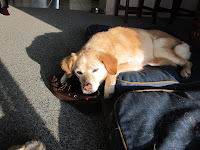 This is our last photograph of Sofy, lying in the sunshine as was her wish with her head on Allen’s shoe.  She loved the sun and being out on our deck and lifting her nose to the pelicans flying overhead or to smell the salt air.
In Raleigh, we needed some ways to get outside of our condo.  So we took up kayaking. I had spent a bit of time in canoes and in tandem kayaks.  Climbing into one by myself and maneuvering it was all new to me.  But I did and I started with a 14 footer. 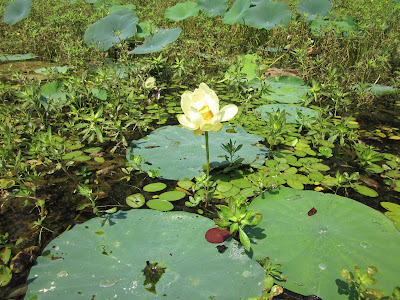 We spun around Lake Raleigh where there are herons and egrets and water lillies and turtles.  Allen documented the adventure, which led to many more kayaking mornings.  This is one way in which the desert kneaded me to new forms and new intentions. I also paddled the kayak a lot.  Just to be clear.  But as is the way with motion, it was also nice to sit and watch the Canadian geese and to hear their cranky calls warning all of creation that interlopers had arrived.
They day we moved into our bungalow in Asheville, Sofy died.  She had come into my life on May 15, 1995, the week I began my ordination process in the Presbyterian Church.  The day we moved into our home for acupuncture school, she quickly died of an apparent stroke.  Her death was a perfect one, apparently painless, only briefly disorienting, and with all of us aware, present, and mostly ready.  I remain heartbroken at her leaving and relieved that it was not my responsibility.  I was only made to let her go.
In some ways I believe she was also able to stay with me through that final week of study and until I took the national exam for licensure, and passed it.  After that, I did not feel her with me in the same way, but once in a while I do see an unfamiliar shimmer in the trees and I attribute that to Sofy leaning into the sunshine.
We buried her at Brierpatch the week after my orientation to acupuncture school.  Our new addition, Karma, joined us just in time for the Cheeseburger Memorial Service Sofy was so worthy of.  We put the drippings in her grave because she would lick the ashes after grilling until her nose turned gray. I hope Rudbeckia don’t mind cow grease. Karma is paying her respects to Sofy (or else considering how to get under those flowers to the drippings….. 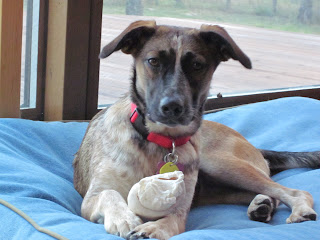 Karma is a fabulous playmate for Louie and a very cuddly companion for us, too.
She has signed on to an interesting journey with us.  We imagine sometime taking her and Louie for swims while we kayak, for hikes in the mountains.
Allen is enjoying a new mountain bike as well.
So I suppose our westward journey was about kneading the desert and traversing it in the ways we could, discovering much about another culture and about ourselves.  In the end, I believe it was my own spirit and heart that was kneaded as much as anyone or anything else.  The stuff beneath my skin (which massage therapists would call ’tissue’) feels different.  I feel different and much the same. Much of what I felt immersed in with concern or passion or determination now seem like points of historical relevance.
I am entering a new conversation in Classical Chinese Medicine. It is different and it is the same.  It is about taking action that can affect the spirit/ the energy around one.
The beginning of this school was grounded in tradition, lineage, ritual, praxis.  We seek balance.  There is the point of reflection and the point of articulation.  Yang and Yin.  The intention is to step onto the path of the energy flow rather than to resist it.  The intention is harmony rather than passivity.
It is all based in changes.  Everything changing.  All the time at all times.  Changes. 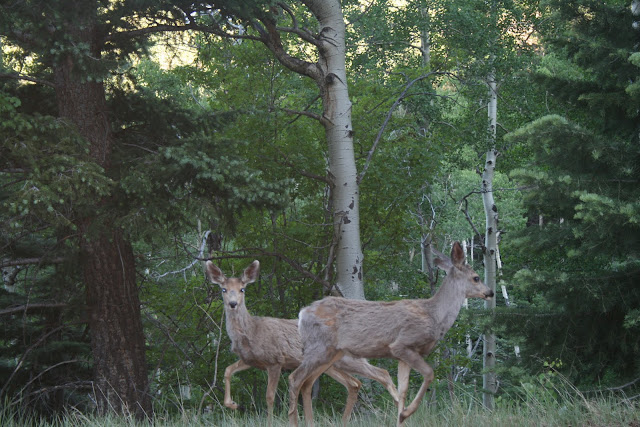 My own intention moving forward is to try to still pay attention, to have weekends of play and discovery, to hold on to gratitude, to let the dust blow past and to join the dance.  On each and all points, I have the desert’s kneading to thank.