Yesterday we took ourselves on a tour Flagstaff, Painted Desert, and the Petrified Forest. Thanks to my sister in law Hillary’s recommendation, we started off with a great cup of coffee at Macy’s in what the locals call “Flag”. We enjoyed being in reasonable temperatures (50s) with snow still clinging to north faces of mountains

Our first stop was thedog park where we got some skinny on the local dog owners. Louie has re-defined traveling for us. We let him and Sofy run on the icy tundra while a young girl waxed on about how amazing the length of our dog leashes were “holy shoot!
” she proclaimed. This brought her mother forward.
Then we were off exploring. the day was rather overcast, so our plans for the Grand Canyon were delayed for brighter skies. We bought our annual parks pass and trapsed thro
ugh the Petrified Forest and the Painted Desert.
Some would say it is better to show than to tell. I have not yet processed enough of th
e time to figure out how to show you what it is to be in the middle of all this land — all this red dirt. Red clay I know. Red dirt is new. It is as if there is no horizon, you are walking in the middle of horizon. The words I can muster are majestic, wide, full of the empty, vast, timeless.

I am reminded of something Craig Childs wrote in Soul of Nowhere, which I paraphrase here: I dropped into this canyon and I realized I was standing in the 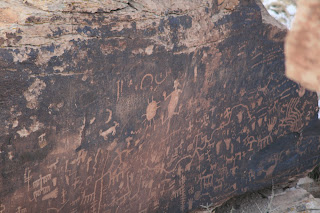 Allen knew to pull over and see Newspaper Rock. He remembered it from his trip at the age of 10 with his family and it was still mesmerizing to see this largest collection of hieroglyphics in North America. We longed to scramble about the petrified forest and the newspaper rock. We marveled that the fallen trees had split not grain wise along the length of the tree, but rather in disks with chainsaw smooth breaks. We will have to study up on how this happened. Imagining this vast expanse as part of a forested bog nearly defied imagination.

To ground us, a very chatty raven perched above Newspaper Rock. Had we known some of the
60 words Ravens speak, we might have been better guests. As it was, I just snapped his photo and continued on with our agenda.
On our trip north to the Painted Desert, we passed the Cholla Power plant where coal is converted to electricity. Lest I leave you with too Edenic a perspective on it all, here is the ongoing contributions of the plan to the landscape. It is indeed a strange offering (sacrifice?) to such apparent holy ground.

Today we were full of Sedona. I must say it is surprising to see how tiring it can be to be immersed in the canyons, to drink in the green pine needles against yet another profoundly blue sky. My eyes ache from being opened so wide. I mean this literally. My eyes just stay open all the time it seems, drying out with their amazement. Soon I will update you our canyon jeep tour, courtesy of “Josh” who was well read and full of suggestions for hiking and camping. We had a great off road experience and took another 40 photos to choose from.
I have not even written yet about Montezuma’s castle or the Verde Valley which we trapsed through on Saturday. We are definitely moving fast to get our bearings before school starts.
Tomorrow is the South Rim of the Grand Canyon. Then we look forward to a breathing day to catch up on laundry and let some of the desert dust settle. It has certainly been a perspective adjustment to see so much. Winter is the time to come and bathe in sun and light!
Thanks for following along – it is so good to hear from you folks back ‘home’. We miss you!