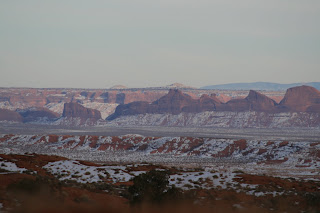 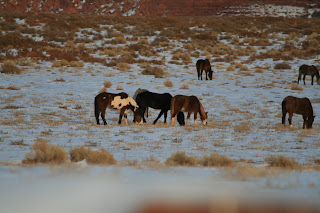 I’m sitting in our bed with a cup of hot tea, waiting for Allen to get home from the YMCA and searching for words to show you the awe and adventures of the last three days.  Snow has been gently falling outside the window today and we expect rain for the coming days.  It will give us time to land again.
I think pictures will show  you more than I can write….. This is what we saw on our drive through monument valley in part of the Navajo lands.  We saw a copy of the document Millard Fillmore wrote allowing them to return to this sacred country.  It is very spiritual.  Not so good for ‘production’ but we suspect they value the spirit and their place in creation more than accomplishment and productivity. 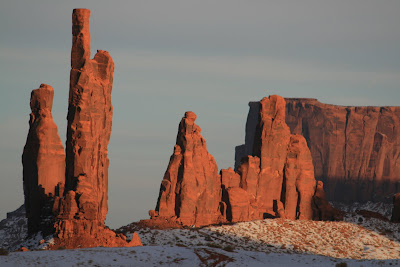 Allen woke up early our first morning ‘on the res’ and took many sunrise photos while I got up on some snoozing.  I’ve been following my dermatologist’s orders an putting an ‘anti cancer’ creme on my face for two weeks. It has been very painful – rather like folks describe radiation, and it has burned lots of supposed pre-cancer skin off my face. I have been a SIGHT.  It was great to get to linger in sleep and wake up to such beauty outside the window. After taking about 75 pictures, we laughed with other tourists at breakfast – one fellow with European speech claimed to have taken 135 photos that morning at Monument Valley.  Some of the rocks are the core of volcanoes, others of them have been caused by erosion.  They are monuments to time I suppose and witnesses to dinosaurs and much that came before them.  There is a scale out here unmatched anywhere else my travels have taken me.  The scale of time, of grandeur, of history.  What does it take for the Navajo nation to continue surviving out here?  This is introvert heaven.  At this time of year there are not many people angling to ‘get a look’.  There are as many tourists as horses.
Allen planned the day for us: Canyon de Chelly.  It has been ‘on my list’ since reading Craig Childs’ books.  Not only did we ‘ride the rim’, we even hiked down on the public trail and scrambled about.  I was SO excited to crawl down into such expanse.  On the video at the welcome center, Carlos Nakai spoke of this canyon as a sacred place, settled by Hopi before Navajo.  He used the apt Navajo term which means “we walk in beauty”.  I believe at one overlook we encountered this man, whose recordings of Navajo pipe music I listened to from El Paso to Tucson.  He was speaking with other tourists about following his dream of playing music and getting international requests to play.  I never heard his name, but his story fit. I was moved to hear him speaking to a mother about her son, who apparently had expressed interest in Native lands and people, “I followed my heart and I knew I needed to play the music.  And the offers came.  It might be the same with your son.  He wants to learn the ways of our people. Maybe he will follow that dream. Maybe he will become a famous trader. Or like the doctor who once lived here. He came back years later and here was this old white haired anglo (I think he said anglo) who started speaking in perfect Navajo and we were all amazed…..”  Maybe it was not Carlos Nakai, but  I will enjoy his music more for believing it was.

This entrepreneur was raising money for playing basketball.  His mother stopped by to give him his cell phone and to pick him up later.  She is a single mother and said that her son wanted to help ‘pay his way’.  He was very assertive and friendly and told us all about the hieroglyphics he had drawn on the shale.  Instead of purchasing the art, Allen made a deal to purchase his picture with the art.  It brought to mind my value of self determination and proactivity and how it conflicted with what I offered encountered in prison ministry:  a sense of victim entitlement.  I wonder how ‘navajo’ it is for him to be an entrepreneur in this way.  I appreciated his blend of ‘anglo’ acquisitiveness with maintaining a value of his own narrative and story.  I will remember him

Here are some photos of our hike into Canyon de Chelly:  it took me 2 hours to climb down (the signs say it will take 2 hours round trip).  It was icy in patches and muddy in others and down in all of them.  I was able to climb out in 27 minutes including time for a photo.  What I learned on this hike is that for me, going down when I feel unsteady and wiggly, I can only look at the place for my next footstep, literally  Climbing up, I can look several paces ahead.  Allen said that might be a good metaphor for me.  I think I’ll just let that lie for now….. 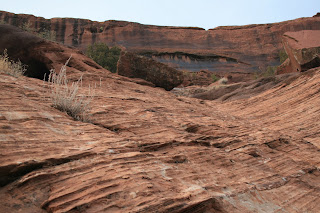 and this is near the top, when some high school  leadership student from Abilene, Texas had mercy on us and gave us a Kodak Moment breather.

the goal of it all was to see this ancient dwelling: 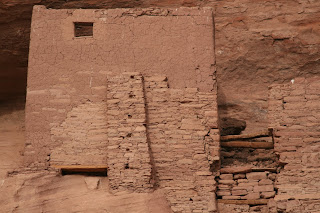 We headed back to our Navajo run motel in the side of the mountain in Monument Valley and ordered up some Navajo fry bread and ‘traditional navajo fare’.  Mine was a Navajo sandwich. It was explained to me that this was more traditional than the quesadilla option. the sandwich was made with flour based fry bread and had thinly sliced turkey inside it with packaged mayonnaise.  The quesadilla was not traditional as it was made ‘with corn’.  It makes one wonder about traditional and history.  Traditional in this case was all about the waitress’s grandmother’s offerings at home.  I loved being surrounded by the weavings everywhere – the work of many women’s hands.

I do wonder about the Navajo ways and traditional life. The video at the welcome center mentioned that in the ‘old ways’ the people came to Canyon de Chelly for the spiritual rituals.  “When the Seven Sisters (a favorite constellation of mine) rises in the eastern sky (I think I have this right), it is the beginning of our winter… but how many of our Navajo young know this now?”

We awoke to a John Wayne movie set in Monument Valley.  Jarring is the only way I can describe the morals and the presentation of all of it: looking out our window, ‘stoned’ nearly out of our minds by the beauty  and John Wayne all righteous and saving us all from the bad bad injuns.  Something like that.

And then — we were off to Page.  The plan:  ride a boat onto the lake which is 100 FEET down due to drought and over use.  The reality:  there was NObody at Page.  The boats don’t run until mid-February or April 1 (it’s hard to get similar stories sometimes) and anyway the point is, not yet.

We drove about a bit and finally landed in place that offered Antelope canyon tours.  This was also VERY big on my list.  Here is why: And then we drove ‘home’ to 223 North Alarcon Street.  It was nice that it felt like home. we had some navajo weavings in tow and we settled back into life with morning coffee and active Louie and sleepy Sofy and each other.
It is quite a life we are living these days – we are feeling very fortunate.
I am feeling very Navajo in finding a new place – a re-orientation to my place in the world.  the Navajo self description was:
Being of the Five Fingered Ones
I rather like that.
On Thursday I will be ‘of the Tired Tailbone Ones’ sitting for six hours in class.  I suppose the updates may slow down to weekly or so about then.  I will be back on workout schedules in early mornings and getting to know my fellow students.  I will hope to evolve to be ‘of the Fancy Fingered Ones’ or “She Who Has Mighty Strong Hands’… we shall see.
for now I am grateful to have my face healing up, to have gentle snow spilling down, and such good and graceful company on this journey.