I have been thinking about the phrase I learned from India via the Kaylor family: full of the empty. It was the way the Indian people explained something was empty. Our journey has felt full of the emptying in many ways.

From the route across the Bayous of Louisiana, where the setting was more a character than any creature I encountered (most of the people whose paths we crossed in New Orleans were middle aged Cincinnati fans or their spawn and were remarkably two dimensional in their presentations). The Spanish moss,
which my nephew Birch calls ‘fairy food’ was
drooping with a haunting elegance along black colored waters. The skies east of the Mississippi were cloudy and monochrome. Somewhere along the width of Texas the fog lifted and the skies lightened… and then we were in San Antonio.
Our lodging of choice there was all about pet friendly and the River Walk and not about accoutrements or beaut
y. We were glad to say goodbye to the La Quinta Inn, even if they DID have waffle irons in the shape and form of the state of Texas.
Then to El Paso. We were granted a tour by an assistant City Manager (Geoffrey’s mother) and were surprised w
hen she pointed out the driver’s window and said, “all of that is Mexico”. We were crossing the Rio Grande, which you can see from I-10, such as it is. At the point of El Paso it might be known as the little Brook (whatever that is in Spanish). We loved El Paso — and I was struck by how normalized it seemed to find middle class hispanic people living, eating, talking, and working with ‘anglos’. Those distinctions may be meaningful to El Pasoans, but were not evident to a Carolinian.
Geoffrey’s family is entertaining, warm, engaging, funny, and charming. We loved them 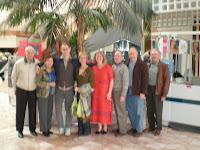 in a minute and really appreciated the extra effort of the stories
of El Paso – the political clout long fought and won to close a polluting plant, the beauty of the University there and mountain vista views over the city and over Mexico. We both left thinking: we could live here!
Then to Tucson. What an amazing and romantic city! I’ve long been intrigued since reading Barbara Kingsolver’s writings on the
place. We arrived at twilight last night and the exit we took drove us up on what we later learned is called The Boneyard. It is a cemetery for decommissioned aircraft. Passing a mile of silhouetted transport planes lined up like ghostly tombstones was haunting in its simplicity.
this morning we were delighted to discover the off leash dog park was across the street from our room and Louie was able to be full of the Louie and we could delight in the Louie-ness of Louie. Many Tucsonian
dogs also enjoyed him. Allen struck up conversations with Dog Park Dads and we were advised to spend our day at the Desert museum and driving up Mt. Lemmon.
Brilliant advice. We were mesmerized by the setting here. You round a corner and there is a cactus!
There are forests of cacti growing amid huge boulders and rocks. There is nothing like this on the East Coast or in any other country I’ve visited.

This is something like a mission trip: lots of new thoughts and ideas and moments. And slathering up with sunscreen. And trusting in the generosity and wisdom of locals (read strangers). And, like mission trips, it’s working out quite grandly.
The Desert Museum provided us with a hummingbird room and an aviary as well as explanations of geography and desert flora,fauna, critters. Allen kept remarking on how beautiful it was, how unique, how lovely. He had five year old eyes on and it was great to walk beside him.

There is so much light so much sun so much chemical rush to being out here in the desert. We have not yet learned how to manage the light. We are walking about in baseball caps and sunglasses and still squinting. We must be a sight, truly. I can’t believe how good it feels to have the sun and light — I think I can feel the photosynthesis happening each second inside me.
Then up Mt. Lemmon — where in one hour we climbed from saguaro to ponderosa pines and juniper and ice and ski lifts. We took far too many pictures of sunset over the many ranges and at 9200 feet we could see quite far. I will post those as soon as we unpack the camera cords and tack a few up with th
is blog.

We are remembering our five commitments as a couple: beauty, simplicity, creativity, compassion, and engagement. It seems the desert will be full of these for us. It means so much to have ways to share this journey with you all. Thank you!
Tomorrow is an early start. We have found a place we hope will be our ‘kennel’ in Prescott and they offer daytime play for dogs as well. So we’ll head up through Phoenix and drop the dogs off at the Doggie Dude Ranch (egads) and unload. We are REALLY going to miss Stephen and Jesse then — We’ll be four hands shy tomorrow. The gas and cable folks are due on Wednesday afternoon – so we should be pretty well moved in by Thursday night — but who knows?
We see predicted clear skies and are full of anticipation about the coming weeks. It is good to be emptying of the usual expectations of ourselves and of life, to be emptying of roles and of the practiced anxieties.. this is not to say we are not filling with other wonders and worries. But they are new and unfamiliar ones. I am trying to relish this time between what is imagined and what is encountered. I am re-learning that it is a very big world we have to enjoy. Tucson twinkles from the mountaintop. Sometimes darkness illuminates.